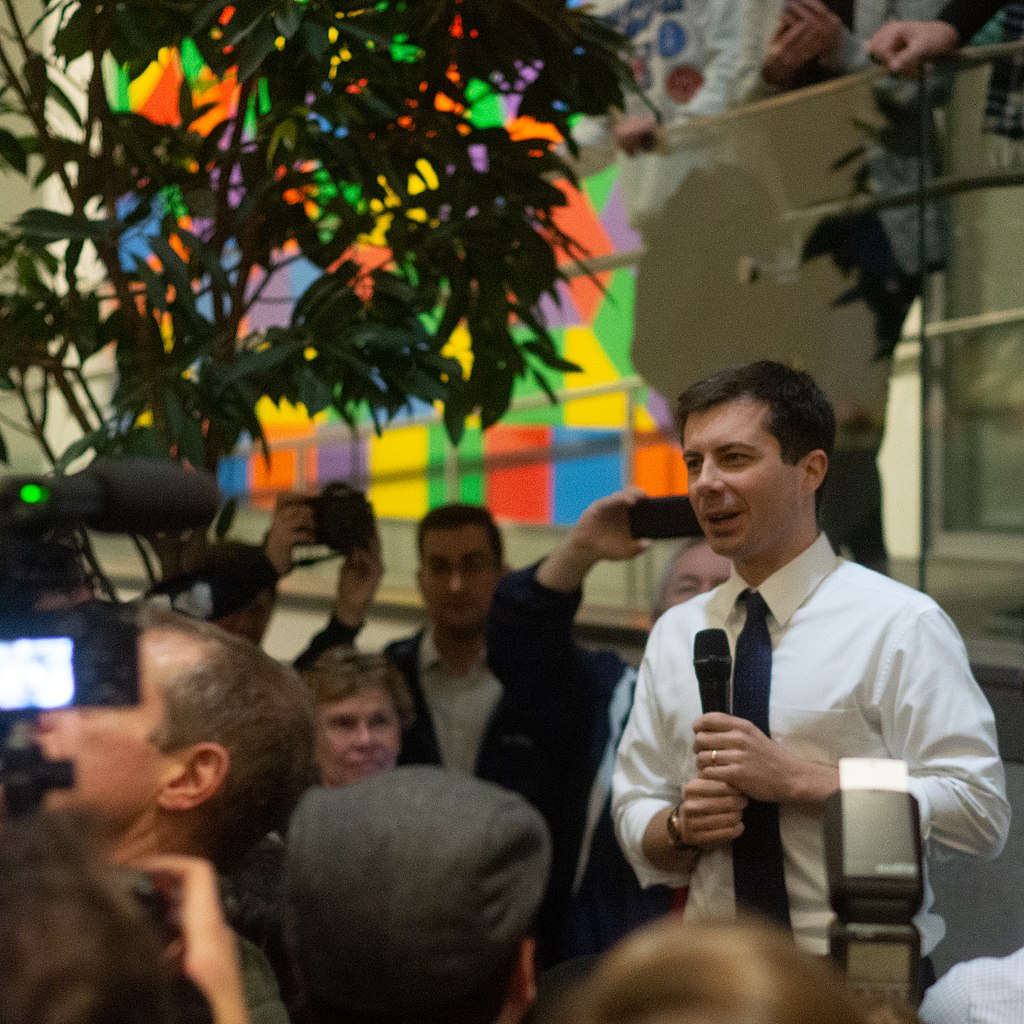 “Evangelicals helped get Trump into the White House. Pete Buttigieg believes the religious left will get him out.”

Interviewed by Sarah Pulliam Bailey, “Evangelicals helped get Trump into the White House. Pete Buttigieg believes the religious left will get him out.” The Washington Post.29 March 2019.

A gay mayor from Vice President Pence’s home state who wrote a Harvard thesis on the Puritans, Democratic presidential candidate Pete Buttigieg wants his party to embrace religion but not at the expense of excluding others.

In an interview Wednesday about his faith, Buttigieg said the Democratic Party has sometimes become distant from religion, but it’s “a side effect of something healthy” because of its commitment to the separation of church and state, and the belief that it speaks for people of any faith and of no faith equally.

“I think there’s an opportunity hopefully for religion to be not so much used as a cudgel but invoked as a way of calling us to higher values,” he said.

“I think it’s unfortunate [the Democratic Party] has lost touch with a religious tradition that I think can help explain and relate our values,” he said. “At least in my interpretation, it helps to root [in religion] a lot of what it is we do believe in, when it comes to protecting the sick and the stranger and the poor, as well as skepticism of the wealthy and the powerful and the established.”

He thinks President Trump has found favor among many white evangelicals and white Catholics because of his opposition to abortion, he said. But Buttigieg said he believes the president is behaving “in bad faith” and said there’s no evidence that he doesn’t favor abortion rights deep down.

“I do think it’s strange, though, knowing that no matter where you are politically, the gospel is so much about inclusion and decency and humility and care for the least among us, that a wealthy, powerful, chest-thumping, self-oriented, philandering figure like this can have any credibility at all among religious people,” he said.

Buttigieg was married last year in a denomination that only in the past decade began performing same-sex marriages. The marriage debate was hovering over the Episcopal church and over his diocese, he said, around 2008, when he moved back to South Bend.

“Thankfully, it had been settled as far as our diocese was concerned by the time I got married, because I wanted to be married in the church, and I’m glad we were able to do that,” he said.

Growing up, he said, Buttigieg found tensions between faith and sexuality. “I found it difficult to reconcile with organized religion,” he said.

Now, he said, he understands why people believe the Christian faith leads them to oppose same-sex marriage, but hopes they encounter scripture interpreted a different way.

“I hope that teachings about inclusion and love win out over what I personally consider to be a handful of scriptures that reflect the moral expectations of the era in which they were recorded,” he said.

Buttigieg stands out in the Democratic field because, in most ways, he doesn’t actually stand out, said Kristin Du Mez, a historian at Calvin College who studies religion and politics.

Now he calls himself “liturgically more conservative,” preferring to be in a group setting with a set liturgy. He tries to attend services weekly and spends time reading scripture when he can. He said he looks for religious inspiration from people who have put faith into action, such as the Rev. Martin Luther King Jr. and “modern-day heirs to that tradition,” including the Rev. William Barber, a North Carolina minister.

“As we talk of the need for a religious left, we should remember that the black church has been [putting faith into action] for quite some time,” he said.

Darren Dochuk, a historian at Notre Dame who writes about religion and politics, said Buttigieg clearly endorses a progressive faith rooted in Christian social gospel teachings, a movement that tied faith to action, which many young people in both Protestant and Catholic churches will find appealing.

“I have doubts that his talk about God and social Christianity and his desire to shift the religious politics of our day to the left will gain much traction among a majority of white evangelicals and conservative Catholics,” he said, citing opposition to Buttigieg’s abortion rights stance and the anti-LGBTQ sentiments in those communities. “Whatever the case, I think he rightly senses the need for Democrats to quit avoiding or dodging or minimizing the God factor in American politics.”

Buttigieg’s hope for a revived religious left is not new. Religious liberals have been voicing similar sentiments for years. But in 2019 with Trump in office, many see an opportunity to give Democratic policies moral language.

Buttigieg points to Catholic thinkers as influential in forming his idea of the role of faith in politics. In a government class at his Catholic high school, he was shown the 1989 film “Romero,” about Salvadoran bishop Óscar Romero, who was assassinated in 1980 after challenging the ruling elites, a story that helped form his understanding of human rights.

He also said he has been influenced by Catholic liberation theology, which was practiced and preached in Latin America beginning in the 1960s as a call to action against unjust societies that oppressed the poor and has found the spotlight again under Pope Francis.

He especially respects the work of early Christian theologian St. Augustine, Catholic historian Garry Wills and Jesuits like popular priest James Martin. On Saturday, Buttigieg and Martin will get awards from a gay and lesbian alumni organization from Notre Dame and Saint Mary’s College.

Bailey, Sarah Pulliam. “Evangelicals helped get Trump into the White House. Pete Buttigieg believes the Religious Left will get him Out.” The Washington Post. 29 March 2019.
https://www.washingtonpost.com/religion/2019/03/29/evangelicals-helped-get-trump-into-white-house-pete-buttigieg-believes-religious-left-will-get-him-out/