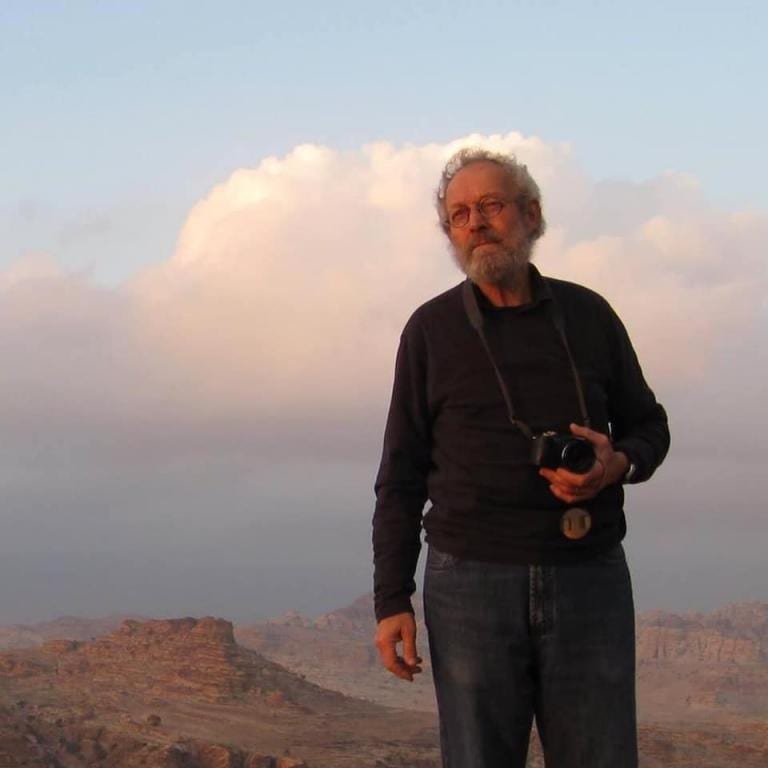 Peace Through Understanding: The Life of a Christian Scholar

I’ve written in this space from time to time on the subject of Christian scholarship, and I feel compelled to return to that topic today, but in a much more personal way.

This past Sunday, my Calvin History Department colleagues and I were shocked to learn of the sudden death of our beloved colleague, Bert de Vries.

Perhaps more than anyone I know, Bert has modled the best sort of Christian scholarship. His obituary traces a few highlights of his career, and I’ll recount only a small number here. After receiving a PhD in Mediterranean Studies from Brandeis University, he began teaching history and archaeology at Calvin. In 1968 he did some initial surveying work at Tel Hisban in Jordan. Even then, Bert’s professional work was linked to his passion for justice and humanitarian concern. In the early 1970s, he and his wife Sally created a program with the Christian Reformed World Relief Committee to support Palestinian refugees. He later served as Director of the American Center of Research in Jordan until the First Gulf War forced him to return to the United States. In more recent years, his work on the Umm el-Jimal site.

I first met Bert when I arrived at Calvin to interview for my first academic job. Truth be told, at that point, Calvin was fourth on my list of preferred places of employment. (Back in the day, it was possible to have several on-campus interviews.) I vividly remember that day. I lectured on sexual encounters between European explorers and native populations in a History of the West and the World course, just to be sure that was something I could do at a place like Calvin. Later that afternoon, I sat at the end of a long conference table in a room filled with nearly all men, a solid faction of whom had beards, all very distinguished looking. I wondered what I was doing there. But by the end of our time together, Calvin had moved up to my top choice. It was the evident generosity and brilliance of these potential colleagues that won me over. Bert was among the distinguished, bearded, witty, and eminently kind historians who made up the Calvin History Department. As I left campus, I couldn’t imagine a more hospitable intellectual home. I knew we would be fast friends, and I was right.

At that time, Bert was pursuing an innovative approach to archaeology, which he called “community archaeology,” or “inclusive archaeology.” A critic of imperialism and an advocate of justice, Bert always practiced what he preached, and he worked to pioneer an alternative to traditional Western approaches to archaeology that refused to entrust local communities with the interpretation and preservation of their cultural heritage. Instead, he worked to empower local communities to be the curators of their own history. Fluent in Arabic, his work endeared him to many; he formed deep and enduring friendships with the people of Umm el-Jimal, who came to know him as “Abu Butros.”

In 2009, Bert helped to found Healing Children of Conflict, a West Michigan organization that brought children seriously injured in conflicts involving the United States to this country for medical care. As the organization’s mission statement articulates, “By taking responsibility for healing children with traumatic injuries from war arsenal we seek to spread healing and reconciliation between one community, the war zone, to another—Grand Rapids and West Michigan.” I participated in this organization at Bert’s invitation, and a few years back my son spent a summer playing with a young boy from Iraq who had lost a leg in a missile attack.

Bert and his wife also worked to raise funds for the large Syrian refugee community near Umm el-Jimal, and created programs to bring refugees together with the community. In 2019, Bert was recognized by the Jordanian government when he was presented with the King Abdullah Medal of Excellence, Jordan’s highest civilian honor.

Bert seemed to have limitless passion and energy. As recently as a few days ago, he could be seen jogging across campus. It will be a long time before I stop expecting to see his head pop into my office, as he gushes about the work of a colleague, grieves an injustice, or tells me to keep doing what I’m doing. Bert was a tireless advocate for the cause of justice, locally and globally. He was a pacifist who lived his values. And he was an unfailingly generous mentor. Early on, I took note as I watched how he treated even the most inexperienced students (or, in my case at the time, a very junior colleague) as valued collaborators and, in many ways, as equals.

Bert leaves behind a generation of former students who have taken their place the field of archaeology around the world. And for many of us, he leaves a legacy of genuine Christian scholarship that stands as an inspiration to those of us who seek to follow in his footsteps. More than once, when someone has brought up my own work as an example of what Christian scholarship might look like, I’ve responded by saying, “You should meet my colleague, Bert de Vries!”

In the end, and perhaps most importantly, Bert was loved by all of those whose lives he touched, personally and professionally. His obituary opened with a simple sentence: “Bert’s mission in life was peace through common understanding.” I cannot think of a more apt way to sum up his life, or to testify to his witness as a Christian and a scholar.

Rest in peace and rise in glory, Bert.