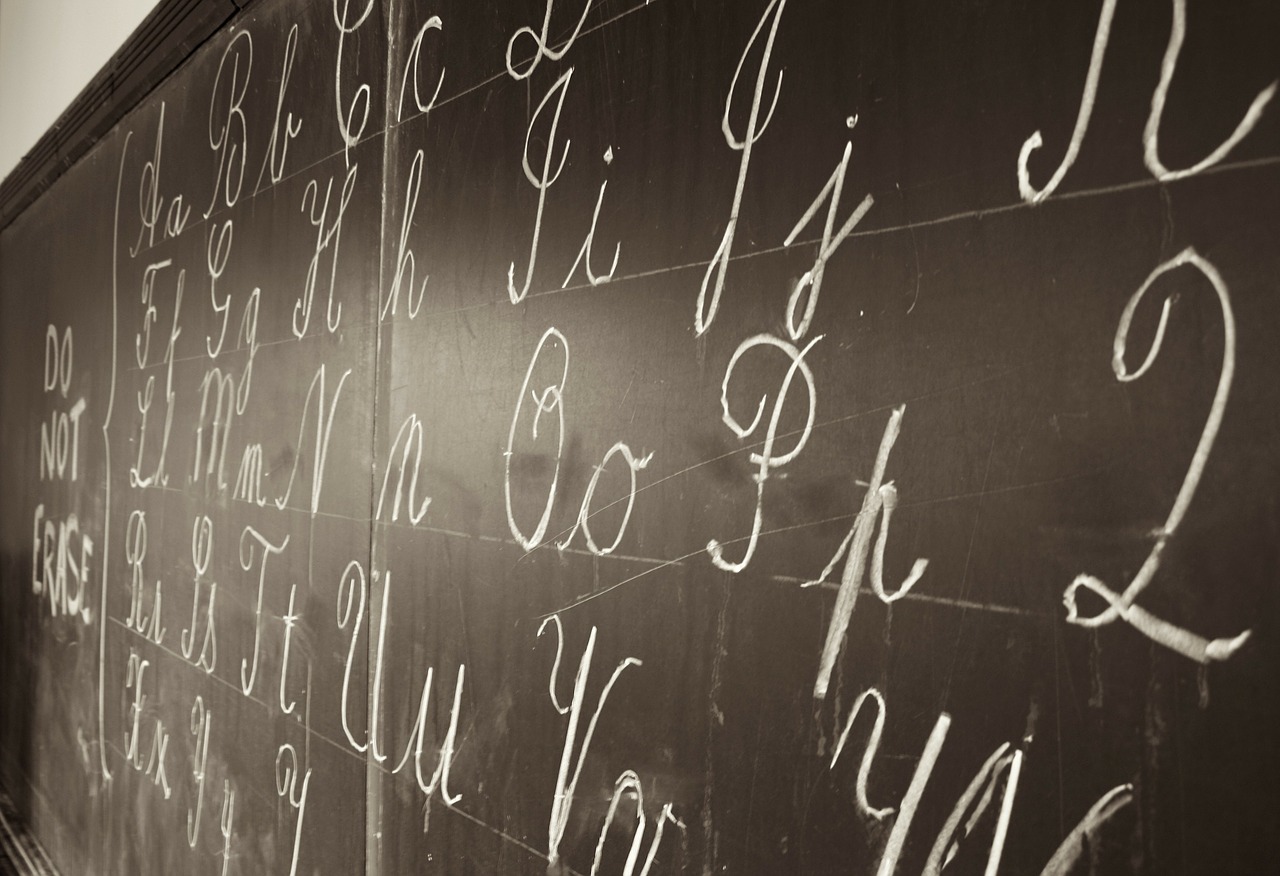 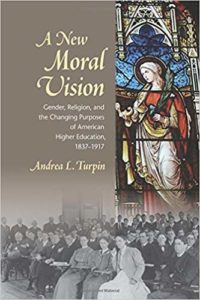 If you clicked on this link because you’re desperately seeking a new moral vision, this might not be exactly what you’re looking for. But perhaps you can find here a new vantage point from which to pursue this quest…

In her new book A New Moral Vision: Gender, Religion, and the Changing Purposes of American Higher Education, 1837-1917 (Cornell, 2016), historian Andrea Turpin of Baylor University investigates the moral messages our institutions of higher education have been transmitting. Are we instilling in students a commitment to the common good? Are we making space for diverse students, and providing the guidance and freedom for students to develop their gifts and talents? And how does attention to both gender and religion help us both to ask and answer these, and many other questions?

Andrea was kind enough to join us at Anxious Bench today to share with us a preview of her fascinating new book.

KKD: Can you give us your book’s central argument, in a nutshell?

A New Moral Vision argues that in the decades before the Civil War, evangelical Protestantism provided the main impetus for opening the highest levels of American education to women. Between the Civil War and World War I, however, shifting theological beliefs, a growing cultural pluralism, and a new emphasis on university research led educators to reevaluate how colleges should inculcate an ethical outlook in students―just as the proportion of female collegians swelled. In this environment, educational leaders articulated a new moral vision for their institutions by positioning them within the new landscape of competing men’s, women’s, and coeducational colleges and universities.

In place of fostering evangelical conversion, religiously liberal educators across all these types of institutions adopted a form of moral formation they thought would be both more religiously inclusive and more marketable: instilling in students a surprisingly more gendered ideal of character and service than had earlier evangelical educators. Because of this moral reorientation, the widespread entrance of women into higher education did not shift the social order in as egalitarian a direction as we might expect. Instead, college graduates―who formed a disproportionate number of the leaders and reformers of the Progressive Era―contributed to the creation of separate male and female cultures within early twentieth-century public life and beyond.

KKD: This book is located at the intersection of women’s history and religious history. Is this a vibrant area of study right now?

YES! This intersection is an incredibly vibrant area of study. I am currently teaching a graduate seminar at Baylor entitled “Women, Gender, and Sex in American Religious History.” I have replaced over 1/3 of the books on the syllabus since the last time I taught it because so many excellent works have come out in the last three years (including yours!). Surprisingly, though, the vitality of this area has not yet been fully recognized by either women’s historians or religious historians. In 2007, Catherine Brekus published an excellent essay that compellingly argued for both the importance of religion to American women’s history and the importance of women to American religious history.[1] Yet the most recent State of the Field of U.S. Women’s and Gender History essay in the Journal of American History almost entirely ignored religion.[2] Meanwhile, book lists by prominent evangelical leaders interested in religious history continue to include very, very few books about or even by women. Nevertheless, there are some encouraging signs of change on both fronts.

KDK: How would you situate your book in terms of these fields as well as within the history of higher education?

My book is both women’s history and gender history: it recovers the voices of female educators who contributed to debates over the role of religion and it also asks how the new presence of women in higher education affected changing ideas about the moral purposes of men’s education as well as women’s. I’d say the ratio of women to men in the book is around 65:35. The book is also religious history: it argues for a new way of talking about the changing role of religion in higher education that makes clearer that what was going on was religious liberalization, not secularization. It then teases out how different religious frameworks affected educators’ and students’ sense of themselves as men or women. The book thus contributes to the recent flourishing of scholarship on liberal Protestantism and also to scholarship on the connection between religious beliefs and gender ideals.Two other contributions are worth noting. First, I did substantial research in the archives of student voluntary organizations to discern to what extent students imbibed and lived out the moral messages educators communicated to them. I conclude that students really did internalize these messages and allow them to affect how they used their education after college. I therefore argue that grasping the history of higher education is essential to understanding changes in American society more broadly. Second, I trace how religious beliefs influenced approaches to educating not only students of both sexes but also students of different social classes. In this way, A New Moral Vision contributes to the burgeoning scholarship on religion and class in U.S. history.

KKD: You spent a lot of time in the archives researching this book. What was your best find?

What a great question! It’s hard to nail down the answer because I had so much fun doing the research for this book and got to visit the archives of ten different colleges and universities from coast to coast. I’m not sure if this was my best find, but it was memorable: Princeton was one of the first archives I visited for my research. One day I was reading through the speeches of university presidents there to see how they expressed their views on both religion and gender. I came across a sermon delivered by Princeton president Francis Patton (1888–1902) entitled Religion in College, which, needless to say, was promising on the religion front. Not long into reading it, I discovered it was equally promising on the gender front. Patton announced, “It is intrinsically harder for men to be religious than women,” and it only got better from there as he spun out the implications for men’s higher education (121). This sermon was exactly the sort of smoking gun I was looking for and it was encouraging to find that sort of thing early on in the research process.

Honorable mention goes to a very powerful passage I found in the papers of Bryn Mawr President M. Carey Thomas. She stated that she embraced liberal higher criticism of the Bible in part as a reaction to growing up in a conservative religious community whose approach to the interpretation of Scripture led her as a bright young girl to fear that, taken literally, the curse on Eve “might imperil girls’ going to college” (187). Her experience with conservative Protestantism was clearly quite different from that of the earlier evangelicals who pioneered in women’s education.

KKD: How does your book illuminate the moral role institutions of higher education play today?

My book traces three broad approaches to moral education taken by American colleges and universities in the past. The subset of evangelical Protestants who pushed for women’s higher education in the decades before the Civil War were fairly egalitarian in terms of leaving both women and men freer to use their education to serve God as they saw fit, but their institutions did not easily include non-evangelical students. Liberal Protestant educators in the decades around 1900 made quality higher education for both sexes more accessible to a broader religious constituency, but they more narrowly channeled women and men into different ways of using that education to serve their communities. Finally, the laissez-faire approach of the 1920s recaptured some of the egalitarian bent of earlier evangelical educators while including a broader religious constituency—but at the expense of casting as clear a vision that students might have a moral obligation to use their education to serve the common good in some way.

To me, the biggest take-away here is that all colleges and universities transmit some kind of moral message—even if that message is that education’s purpose is just to get you a job and that you have no responsibility to use it in service to others. My research also suggests that students really do imbibe the moral messages communicated to them in college, so those of us in higher education need to think carefully about what messages our specific institutions are sending. Are we instilling a sense of commitment to the common good? Are we giving all students both the guidance and the freedom to develop and use their unique gifts and talents? Are we making space for students from diverse backgrounds and of diverse convictions? The examples from my research convince me that the best institutions, religious and secular, strive for all these goals, but also that it is difficult for any one institution to excel in all these areas for truly all types of students. So I am a firm believer in institutional pluralism.