Fifty years since the shot rang out. Since Martin Luther King Jr. was gunned down on the balcony of the Lorraine Motel.

Over the years there has been a lot of reflection on the legacy of King, our “inconvenient hero.” But 50 years out, how do we confront the legacy not just of his leadership in the movement, but also of his assassination? 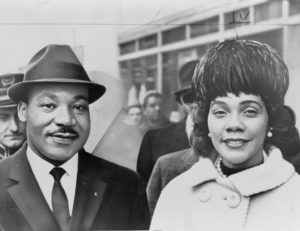 What has his death meant for the civil rights movement, for the church, and for subsequent American history?

As we try to grapple with his death, perhaps King himself offers a place to start. It was 1956, and King was only 27 years old, the pastor of Dexter Avenue Baptist Church in Montgomery, Alabama. He had just started leading the Montgomery bus boycotts, and he was receiving death threats daily—sometimes dozens.

It was on the night of January 27 that he received a call that shook him to the core. With his wife and 10-week-old daughter sleeping nearby, he heard an anonymous caller threaten to blow up his house if he didn’t leave within the week. He felt his courage slip away. He began to search for a way out of the work before him. But then he bowed over the kitchen table, and prayed. He later recalled experiencing in that moment “the presence of the Divine” as he “had never experienced Him before.” He heard an inner voice telling him: “Stand up for righteousness, stand up for truth; and God will be at your side forever.” His fear left him, his uncertainty was gone.

Three days later his house was bombed, but his family escaped injury, and his inner calm and conviction persisted.

He lived in the shadow of death from that point on. He knew it, and his family knew it. And he was not alone. Yet he persisted with a boldness, even a recklessness, that astounds.

There is power in this story, the “power of unearned suffering,” as Mika Edmondson describes it. But when outsiders—white Christians, for example—find inspiration in King’s courage, his commitment to nonviolence, his martyrdom, is there a danger of overlooking the terror, the evil, that caused this suffering? Is there a temptation to resist the necessary work of interrogating how some of us might be implicated in the cause of this suffering, historically or in the present day?

As the 50 year anniversaries of civil rights milestones roll by, I’ve been struck by the role so many women (and children) played in the struggle, and also of their “unearned suffering.”

I think of leaders like Diane Nash and Rosa Parks, of Ruby Sales, Anne Moody, Ruby Bridges, of Cynthia Wesley, Carole Robertson, Addie Mae Collins, and Denise McNair, and so many others. And I think of Mamie Till and Myrlie Evers, and of Coretta King and her baby daughter Yolanda, sleeping in the next room as their husband and father slumped over the kitchen table. Of the strength they drew upon to put everything on the line, every moment of every day.

I can’t help but wonder, too, if a “theology of suffering” is the only, or even the most appropriate response, in the face of evil or injustice? In the face of terror.

As I watch the Mothers of the Movement today—Gwen Carr, Sybrina Fulton, Maria Hamilton, and Samaria Rice, to name only a few—I find myself wondering how this tradition of violence and vulnerability, of courage and risk, has shaped what it means to be an African American woman, an African American child, even today.

And for those who do not participate in this unearned suffering, for white America, the anniversary of King’s assassination demands more than silent commemoration. 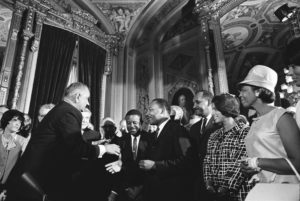 King’s death wasn’t “the transformational tragedy in a victorious struggle to overcome,” Vann Newkirk II reminds us in The Atlantic. Instead, his assassination “was one of a host of reactionary assaults by a country against a revolution.” And “those assaults were astonishingly successful.” White moderates had already abandoned King (thinking he had done enough), the FBI had worked assiduously to discredit King and his movement, and white backlash was gaining momentum. King’s death brought to an abrupt halt the spiritual and intellectual movement, the nonviolent resistance, the beloved community that King helped forge, and America was left with the backlash, with the conviction that enough had already been done.

And what of his memory? “For white America,” Newkirk concludes, “hostility toward the civil rights movement turned into a cherry-picked celebration of the revolution’s victories over segregation and over easily caricatured, gap-toothed bigots in the South. Embracing King became a way to rejoice in overcoming and to reify white innocence, even while ignoring the cries of those who had certainly not overcome.”

Fifty years out, this is no time for cherry-picking.