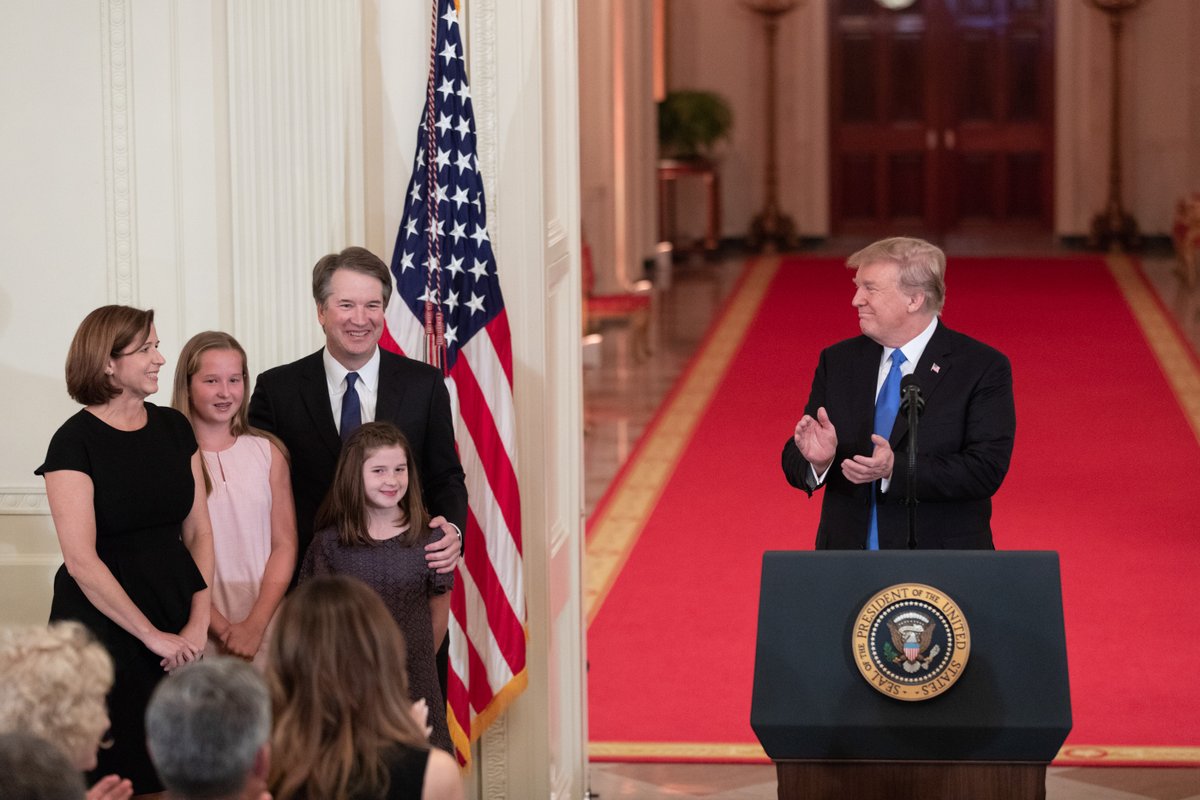 So, it turns out close to half of all white evangelicals think Brett Kavanaugh should be confirmed even if Christine Blasey Ford’s allegations of sexual assault are true. (An NPR/PBS NewHour/Marist poll conducted last week, 48% of white evangelical Christians believed he should be appointed to the highest court regardless; an additional 16% were unsure, leaving only 36% of white evangelicals who would apparently have a problem with an unrepentant perpetrator of sexual assault serving on the highest court of the land.)

To be honest, there’s nothing all that shocking here. The same white evangelicals looked the other way when the Access Hollywood tapes were released, when twenty-two women accused Donald Trump of sexual misconduct, when allegations surfaced of Roy Moore preying on teenage girls, and when an alarming number of their own faith leaders have been caught up in sexual abuse scandals.

It’s not clear that evangelical Christians are more likely than others to abuse women. (Although certain factors such as gendered power differentials have been connected to patterns of abuse, and many evangelical women themselves have testified that evangelical teachings of male authority and female submission perpetuate cultures of abuse, and constrained their ability to confront that abuse). What does give one pause, however, is the unwillingness on the part of so many evangelical Christians to condemn abuse when it does occur.

I’m not just talking about the cringe-worthy statements self-appointed evangelical leaders issue with lamentable predictability in these situations. (Time for another mulligan, perhaps?) I’m talking about devout, church-going evangelical friends posting articles and memes denigrating Christine Blasey Ford and making light of sexual assault more generally. Of the resistance Christian women like Jules Woodson confront when trying to hold an abuser accountable—especially when that abuser is a “good Christian man.” Of the reason a conservative Christian woman like Rachael Denhollander would conclude: “Church is one of the least safe places to acknowledge abuse because the way it is counseled is, more often than not, damaging to the victim. There is an abhorrent lack of knowledge for the damage and devastation that sexual assault brings. It is with deep regret that I say the church is one of the worst places to go for help. That’s a hard thing to say, because I am a very conservative evangelical, but that is the truth. There are very, very few who have ever found true help in the church.”

And no, I’m sorry, but evangelical opposition to the Clintons doesn’t count as opposition to sexual assault. It might count for something, if evangelicals had demonstrated equal concern for Anita Hill at the same time. (To be sure, conservative evangelicals are hardly the only ones guilty of partisan tribalism when it comes to selective outrage over misconduct; liberals certainly have plenty to answer for in this regard as well. But it’s also worth noting that, aside from any partisan political sex scandal, conservative Christian leaders spearheaded opposition in the 1990s to the Violence Against Women Act.)

Why is it so hard to condemn abuse?

Why do evangelicals have such a difficult time condemning sexual assault, harassment, and domestic abuse?

In part, evangelical political identity coalesced around opposition to feminism (among other things). When feminists championed legislation to curb violence against women, evangelicals’ first instinct was to oppose it. But there was more to their resistance than knee-jerk reactionary politics. Evangelical identity was (and is) based in a gender system that makes violence against women easier to dismiss, excuse, and deny.

This statement is sure to provoke opposition from evangelicals themselves. After all, evangelicals have long championed “family values,” and at the heart of family values is the idea that men are called to protect and provide for women and children. In this way, the protection of women is at the very heart of evangelical self-identity.

Why, then, do so many evangelicals seem so bad at it?

Is this simply a matter of perception? Is this an unfair portrayal of evangelicals by a hostile, liberal media? Just another example of pervasive and pernicious anti-Christian bias, of the persecution Christians put up with, day in, day out?

Or, could it be that the things evangelicals do in the name of protecting women actually end up endangering them?

The fruit of the theology

Katharine Bushnell, the subject of my first book, put it this way: “The crime [of sexual assault] is indirectly the fruit of the theology, since if theology teaches the enslavement of woman to man inside the marriage relation; that law of sin which forbids its regulation by law at all—causes this abuse and injustice to leap the bounds which a mistaken theology would throw around it to keep it within marriage relations… Men cannot make unquestioning, obedient slaves of wives only—sooner or later the iniquity of slavery will be visited upon the head of unmarried women also; for iniquity knows not the name of restriction.”

Although she was an unflinching critic of inherited beliefs, Bushnell didn’t abandon Christianity, nor did she abandon a conservative commitment to the authority of the scriptures. (In the 1920s she identified as a fundamentalist, and had nothing but disdain for theological modernists). Instead, after a careful study of Hebrew and Greek, she concluded that misogynistic translators and interpreters had distorted the gospel message, for centuries on end. As a result, “masculine egotism” had produced “a whole fossilized system of theology” that gave men authority over women, and emboldened men to claim the authority to teach women that God had given them that authority, not because of their moral or spiritual character, but simply because of their male bodies. But Bushnell insisted that sexual violence Christian men perpetrated against women—and the dismissal of this violence on the part of “respectable” Christian men and women—ought “to spoil all such theology as that.”

Bushnell had no patience for men who claimed power over women in the name of protecting them. (Protecting women from whom? From other men, of course!) If Christians were truly interested in protecting women, she argued, they would ensure that women were strong, independent, and sufficiently empowered so that they could protect themselves.

Bushnell was not alone. In the early twentieth century, other evangelical women called into question Christian teachings about male authority, and contested the burden men had placed upon themselves to use their exclusive power to “protect” women.

Madeline Southard, a Methodist preacher and women’s rights activist, pointed to the problem with defining women primarily in terms of their relationships to men, rather than as individuals in their own right. By determining a woman’s status based on her being “the wife, mother, daughter, concubine or mistress of some man,” rather than “a person in herself,” Christians placed women at risk. Southard, too, called out the spurious nature of men’s “protection”: “when men think of women as primarily the creatures of their sex relationships and of their blood relationships,” yet deny women any sense of equality with men, “they may love their own women, their wives, their mothers, their sisters and their daughters,” and they might “go to great lengths to please women who attract them and from whom they wish to secure favors,” but outside of these circles “they are rude to women with a rudeness that easily slips into cruelty.”[1] This was not Jesus’ way of treating women. True “biblical womanhood” affirmed women’s status independent of their relationships.

The problem of complementarianism

Bushnell and Southard, however, remained minority voices. The majority of evangelicals in the twentieth century preferred to uphold a patriarchal gender order, defend it as God’s will, and even situate it as a nonnegotiable requirement of the Christian faith. This explains why, in the midst of the recent deluge of abuse allegations sweeping through evangelical communities, someone like John Piper could confidently blame the abuse of women on an “egalitarian myth,” not on the unequal power relations evangelicals have imposed on women and men. For evangelicals like Piper, complementarianism—which enshrines male authority over women in church, home, and society—is the solution, not the problem.

Multiple assumptions are at play here, and dangerous ones. Rather than granting women greater legal protections against harassment and abuse, they prefer to ascribe to husbands and fathers the power to protect women. But by placing such trust in patriarchal power, there is little recourse when those very men betray the women they are ostensibly responsible to protect. For some evangelicals, this scenario is simply unthinkable. For many more, their default setting is to believe men, not women, when allegations of abuse surface. And to blame women, not men, when women do come forward.

Where does this sort of thinking leave evangelical women and girls? In Sex and the Soul, Donna Freitas discovered an alarming inability on the part of evangelical young women to identify and resist sexual assault. The evangelical purity culture, a product of these patriarchal teachings, has left women ill-equipped both to exercise their own sexual agency, and to identify abuse when it takes place. (Freitas finds a similar pattern among women immersed in the secular “hook-up” culture on college campuses as well).

Evangelical women and girls who have experienced abuse are watching and listening with great interest to the conversations taking place around them in evangelical communities. If they’re hearing the same things I’m hearing (a sudden uptick in interest in the story of Potiphar’s wife, for example), it’s unlikely that they will find the support necessary to address the abuse that lurks within their own communities.

It’s worth noting that evangelicals are not speaking with one voice on this topic. Forty-eight percent of white evangelicals support an unrepentant perpetrator of sexual assault, but 36% find this unacceptable. Women like Beth Moore, Jen Pollock Michel, and Karen Swallow Prior (and many men, too) are speaking out in defense of sexual assault victims. Initially cautious when it came to the Kavanaugh allegations, Pollock Michel was stirred by what she heard at the hearing: “I don’t know how you hear that as a woman without feeling the complete horror and panic of that moment,” she explained to the Washington Post, referring to Ford’s account of the alleged assault. “As evangelical Christians, we say that Jesus is the way, the truth and the life. I think it really is a moment for us to be asking ourselves as Christians about our own kind of hunger for righteousness.”

As in the past, this view seems to be the minority view. But those who dismiss the abuse of women must confront the fact that, in doing, so they not only harm victims and enable abusers, but they also imperil any future attempts to witness to the gospel of Christ. And isn’t that the whole point of being “evangelical”?