History and the Human Condition: Reflections on Kate Bowler’s Everything Happens for a Reason 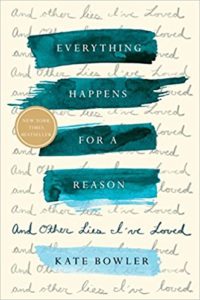 Everything Happens for a Reason: And Other Lies I’ve Loved

I remember the day a couple years back when my Facebook feed was suddenly overtaken with grief. Kate Bowler, the preeminent historian of the prosperity gospel, but more importantly beloved friend to so many in my circle of religious historians, had been diagnosed with stage IV cancer. As she broke the news to all her “dears,” with characteristic grace and wit, the sorrow was palpable.

At that time I hadn’t yet met Kate, but for at least a couple of years mutual friends had kept insisting that we really must meet. It wasn’t long before our paths did cross, at an academic conference. What most amazed me wasn’t that Kate was giving a keynote address while battling cancer while raising a toddler while writing two books. But it was Kate herself. She has an uncanny power to make you feel like her best friend. It wasn’t just that we had read each other’s books, or that we both had an academic interest in the caffeine intake of Christian women bloggers. No, she has an enviable and extraordinary way about her that makes you feel smart and cherished and like you’re sharing a joke together, even if only for a minute.

But Kate had cancer. She was no longer a “shiny” person, a person for whom everything had fallen in place in a charmed sort of way. The irony was impossible to ignore. The historian of the prosperity gospel, the author of Blessed, had come up against something that all the positive thinking in the world couldn’t cure.

Kate wrote about this irony, about coming to terms with her prognosis in light of her research, in a New York Times essay two years ago. That essay ended up being one of the most popular essays the Times ran that year, and it’s now been expanded into a beautiful book, Everything Happens for a Reason and Other Lies I’ve Loved, just out from Random House.

Having just experienced a loved one’s illness and death, I had been eagerly awaiting the release of Kate’s book. When it arrived, I read it cover to cover.

As a religious historian, I ought to have been drawn to Kate’s reflections on the prosperity gospel, to how her expertise in that tradition shaped her own encounter with catastrophe. And it’s true that her scholarly background brings depth and unique insight to this book.

I’m not the only one drawn to her work. Her book has shot to #8 on the New York Times bestseller list for nonfiction books. She’s been on NPR’s Morning Edition, Fresh Air, and I’m sure a host of other places, and her book has been reviewed pretty much everywhere in its first week. Over and over, she’s been peppered with merciless questions: Tell us about dying. Tell us again, this time in more detail. Let’s talk again about your imminent death…

I have to admit that, at a certain point, this started to make me cringe. Why are we all so fascinated with Kate’s story? What are our motives? My motives?

I remember one of her early blog posts, not long after her diagnosis, where she wrote of standing on one side of a glass wall. The rest of the world was on the outside, looking in. I am on the outside. What compels us to stare at those behind the glass? Surely compassion, but perhaps something more? Relief? An almost voyeuristic sense of relief that we are on the outside, that we can walk away when we tire of looking, or when the reality of what we’re glimpsing becomes unbearable?

But mixed with that relief is something more, I think. Deep down, we all know that we are only a stabbing pain, a dreaded phone call away from being relocated to the other side of the glass. In the words of Kate’s doctor, we’re all terminal. Some just have more information.

And so we want to know how to think, what to do, when that day comes. And it’s hard to imagine a better guide than Kate.

At the end of her book, she provides a helpful “short list” of things that should absolutely never be said “to people experiencing terrible times” starting with “Well, at least…” and ending with “How are you really?” Chances are you’ve stumbled into at least one of these, and probably several. I know I have. Happily she also offers another appendix outlining better options.

But more than what to say, the book offers us a guide for how to think, how to feel, in a world that is more broken than shiny.

“What would it mean for Christians to give up that little piece of the American Dream that says, ‘You are limitless’? Everything is not possible. The mighty Kingdom of God is not yet here,” she writes. “What if rich did not have to mean wealthy, and whole did not have to mean healed? What if being people of ‘the gospel’ meant that we are simply people with good news? God is here. We are loved. It is enough.” 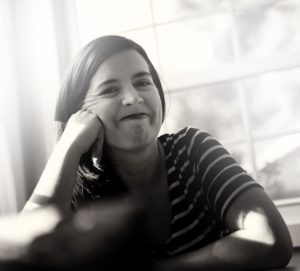 We sense the truth in her father-in-law’s words, that “life is a series of losses.” Those who are privileged to live long enough already know that “with age we slowly lose our senses and even our pleasures, our parents and then our friends, preparing us for our own absence.”

Kate helps us see that, whatever our stated theological convictions, we all cling to the illusion of control: “Control is a drug, and we are all hooked, whether or not we believe in the prosperity gospel’s assurance that we can master the future with our words and attitudes. I can barely admit to myself that I have almost no choice but to surrender, but neither can those around me.”

And she puts words to the disorienting reality of grief. “There must be rhythms to grief, but I do not know them,” she concedes. Yet she is able to capture the gnawing pain of grief in just a couple of sentences: “I used to think that grief was about looking backward, old men saddled with regrets or young ones pondering should-haves. I see now that it is about eyes squinting through tears into an unbearable future. The world cannot be remade by the sheer force of love.”

Kate offers us words to live by, too, reminding us not to surrender too much of ourselves to “someday,” because “someday” might come before we’re ready. And, she advises, “Don’t skip to the end.”

The same week I devoured Everything Happens for a Reason, I came across another reflection on death and grief written by a historian. Two days before Kate’s book was released, the Chronicle of Higher Education published an essay by Stéphane Gerson, “History in the Face of Catastrophe.” Gerson’s catastrophe was the tragic death of his son in a whitewater rafting accident. In the aftermath of the tragedy, he found that the enormity of grief changed the way he approached his scholarship. In some ways, the scope of his questions, “their conceptual reach,” and his “engagement with other scholars and students had narrowed.” But in other ways, he found himself “returning to the past with an urgency” he hadn’t possessed before. “Without realizing it,” Gerson writes, “I grieved not only as a father and husband, but also as a historian. And this, I later came to understand, broadened my relationship to history. It made me a different kind of scholar.”

He was no longer concerned with historiographical contributions, with solving questions about “grief across the centuries,” for instance. Instead, he found himself seeking companionship. “I wanted to know these men and women who…kept ‘the uncertainty of this life ever in view.’” In Gerson’s words, “Though history had lost its scholarly luster, it came alive in other ways. The past provided solace and companionship, immediacy and distance, inklings of understanding and a finer appreciation for what I could never understand.”

Gerson goes on to wonder if we might imagine a scholarly practice that “acknowledges that what speaks to us may also be what moves us?” To consider that “the historical actors and events we deem important may be the ones who touch something inside us?”

I wonder, too, if much of the conversation around “Christian scholarship” in recent decades hasn’t missed something vital. Attention to epistemological questions and questions of purpose are certainly valid, but perhaps there’s something to be gained by thinking more broadly about the human condition. How can the past help us speak to that condition, to live in the reality that we inhabit a world where everything doesn’t always happen for a reason, where we can’t control our futures, or hold on to those we love?

In Kate’s words, “Life is so beautiful. Life is so hard.”