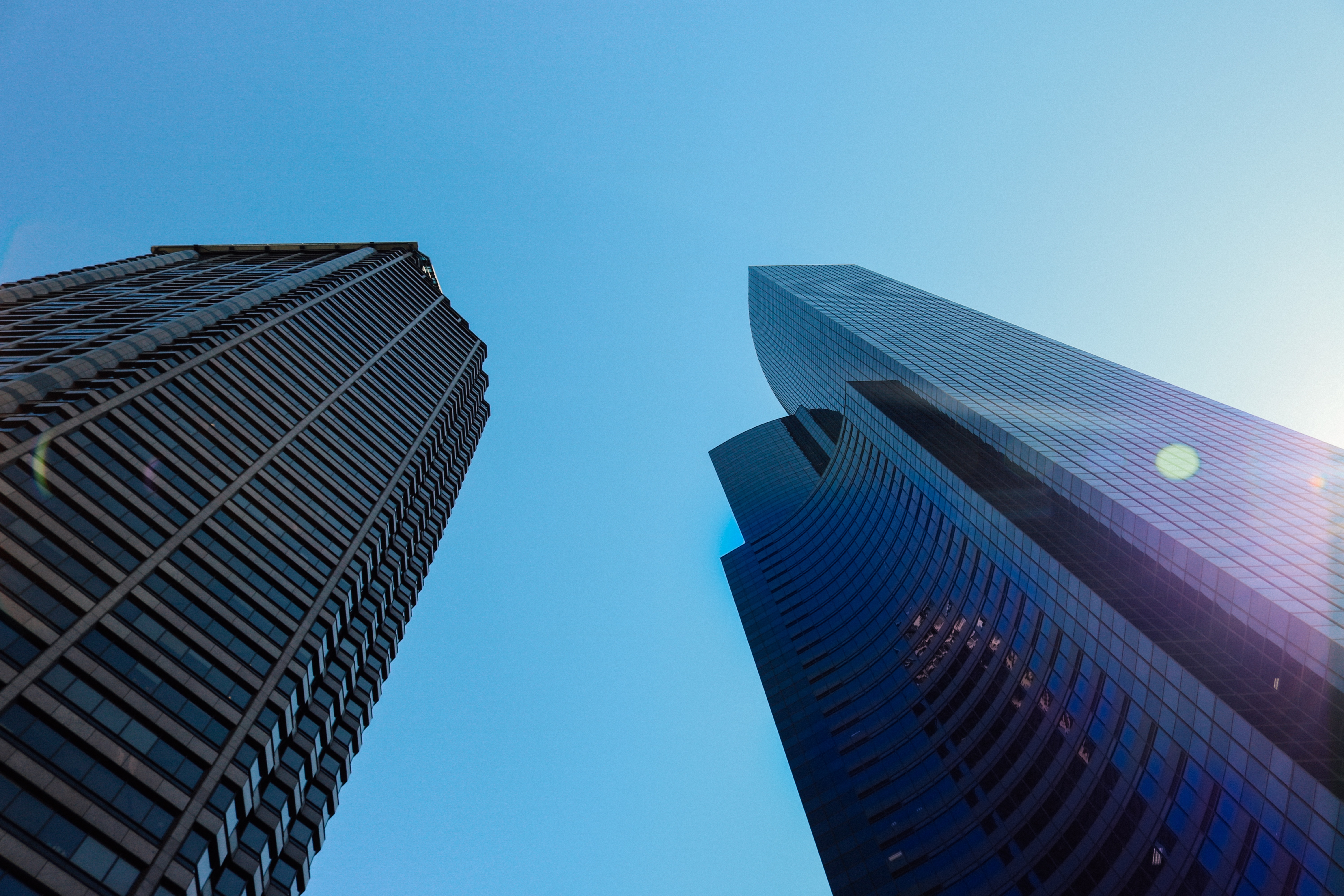 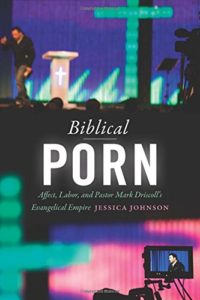 KDM: What led you to decide to write a book on Mark Driscoll?

I never decided to write a book on Mark Driscoll; this project chose me, I did not choose it. 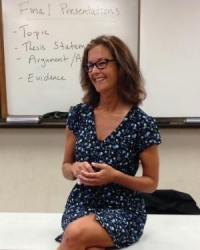 The first time that I stepped into the Mars Hill sanctuary I was beginning my dissertation research on the politics of marriage as framed by debates over the legalization of gay marriage. I was investigating activism on both sides of the issue and interested in what Mars Hill, which was not overtly protesting gay marriage legalization as other local churches and national Christian organizations were, taught about marriage. As I tell the story in my book’s introduction, by the opening moments of Driscoll’s first sermon I was convicted that I would write my first book on the church. So, the journey of my research trajectory as a non-Christian, feminist anthropologist attempting to gain consent to conduct ethnographic research at Mars Hill is an undercurrent of the book’s narrative.

I consider Biblical Porn to be about dynamics of authority, sociality, and subjectivity. At first, I was simply interested in understanding how so many young men and women were drawn to Mars Hill in Seattle, one of the “least churched” cities in the United States. So, the book closely examines Driscoll’s rhetorical performance, particularly his preaching on what he deemed “biblical” masculinity, femininity, and sexuality, and the transmission of this teaching via various media technologies and processes of mediation. However, in the second phase of my fieldwork, as public testimonies by shunned congregants and confessions by repentant leaders began to surface, I became interested in how conviction in a religious movement could be inspired and maintained despite its spiritually abusive, emotionally manipulative, and materially exploitative effects. As a result, imbrications of affect, desire, power, and politics are examined by way of not only Driscoll’s sermonizing but also my experiences at the church as well as interviews with and testimonies by former congregants.

My hope is that the book serves as a cautionary tale given Driscoll’s ability to found a new church in Arizona and regain a public platform. Its key arguments also speak to the populist appeal of the Trump administration and suggest alternatives for rethinking the polarizing cultural climate that the government feeds off and foments.

KDM: You spent a lot of time with members of his church. What was Driscoll’s appeal? What did his church, his theology, do for his followers?

Driscoll’s appeal was more performative than theological. Congregants appreciated that he preached “straight from the Bible,” using an expository style and systematic method in the neo-Reformed mold of John Piper or Timothy Keller, but his sardonic humor was also a draw. He would often remark that he studied and tried to emulate stand-up comedians like Chris Rock when preaching, and that was readily apparent when I watched him sermonize at Mars Hill.

Having said that, it was his preaching on masculinity and his evangelistic vision for the church’s growth and multigenerational legacy that were overwhelming factors in his ability to attract men to leadership positions in the church, which was necessary for its physical replication and virtual outreach online. Mars Hill opened up possibilities for creative freedom in worship and accepted people with tattoos, signaling that it was “culturally liberal” while Driscoll preached biblical truth with enough fundamentalist fire and brimstone to appeal to those who grew up in theologically conservative churches.

Driscoll spoke to men seeking purpose and meaning in their lives as he sought to train them how to be responsible husbands, fathers and entrepreneurial leaders, aims that appealed not only to men but also to women.

KDM: What was it like to have a front-row seat on the dissolution of his “Evangelical Empire”?

It was and remains horrifying, especially considering Driscoll’s continued use of sermon material produced at Mars Hill. He’s been given license to continue to exploit the people that he betrayed without repenting for his sins against them. I heard so many stories of abusive practices among leadership and their toll on individuals, marriages, and families. The story I tell is tragic and resonates with the current political moment, particularly the sense of future threat and perpetual crisis intensified and capitalized on by the Trump administration.

KDM: You are trained as an anthropologist, and the book reflects this methodological expertise. How did that disciplinary background open up different questions when it came to Driscoll’s ministry?

Anthropologists use ethnography as their primary instrument of investigation and writing. The relational and ethical challenges of ethnographic fieldwork require vulnerability. In my case, various institutional constraints afforded me the creative impetus to engage in forms of knowledge-production that were grounded in the body and social processes of embodiment, not simply textual or discursive analysis.

KDM: Given Driscoll’s public significance, were you tempted to set aside technical disciplinary language and write a more popular version of this study? How did you negotiate that tension?

Yes, absolutely. I did my best to write a scholarly book in such a way that former church members as well as those working in ministry or curious about Driscoll could understand its narrative and arguments.

When I teach, I strive to facilitate learning such that theory becomes accessible to my students, and I attempt the same in this book. I believe in the value of that endeavor and appreciate the creative opportunities that ethnographic writing offers me to achieve this aim. So, I demonstrate through storytelling how affect theory was important for me to understand and process my experiences at the church and their effects on me. I situate myself in scenes, regularly use the first person voice, and write about my own confusion, attachments, and labor in order to honor the vulnerability that I shared with those I came to know through this research.

I also wanted to write against stereotypes of conservative evangelicals as anti-intellectual; the first question I was asked at a recent book talk in Seattle was about whether or not Mark and Grace Driscoll attended university (which they both did), the presumption being that Mars Hill members must have been uneducated and duped. The book argues against these processes of “othering” people in the church as well as media accounts that figure Mars Hill as a cult, because such righteous detachment is unhelpful to understanding. I work very hard against reinforcing us/them, self/other, or secular/religious dichotomies in order to disturb the hierarchical relations and fearful postures that they encourage.

KDM: When it comes to Driscoll’s militant Christianity, what lessons can we draw? Does his downfall suggest he took this too far? Or does his resurrection (and, perhaps, the Trump election) suggest an enduring appeal?

I argue in the book that it’s important to historically contextualize Driscoll’s militant Christianity in relation to the global war on terror and its impact domestically in the United States. The evidence I use shows how the church’s use of Hollywood movies (particularly Fight Club and The Hurt Locker); testimonies by soldiers who saw combat in Afghanistan and Iraq; “military missions” that sent Driscoll’s sermons and books to (male) soldiers at military bases; pastors’ use of militarized rhetoric in teaching; and Driscoll’s bullying style of leadership and empiric vision for Mars Hill’s mission, were not only critical to its men’s ministry and but also went viral to infect the DNA of the congregation.

So, Driscoll’s downfall does suggest that he took his militant Christianity too far; my book examines testimonies by former church staff to the lingering effects of spiritual abuse (including PTSD-like symptoms). However, Driscoll’s resurrection and Trump’s election also suggest an enduring appeal to this masculinist, militant orientation to the world that supersedes them as individuals. It’s necessary to stop reproducing the forms of tribalism stoked by the Trump administration and the theological justifications used to support him, in order to undermine and upend the violence and injustices of the ongoing war on terror as it generates and harms racialized, religious, and sexualized “others.”

KDM: What do you think Driscoll’s future holds?

It’s difficult to speculate, but I would say that he is making a gambit to be a bigger player on the national political stage as he forges alliances with the likes of Robert Morris and Charisma publishing. His affiliations with pastors who promulgate the prosperity gospel and are charismatic in their orientation strikes me as strategic on economic and political levels, but only time will tell how large his public platform, audience, and influence will grow as he undertakes this rebrand.