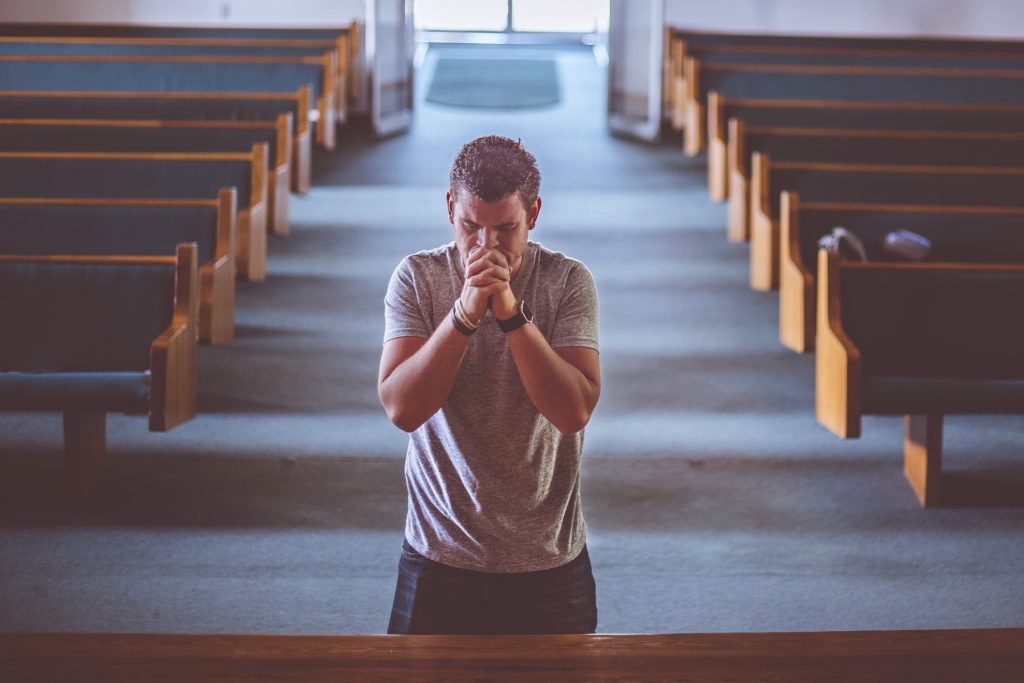 Fear, Power, Nostalgia, and the 81 Percent 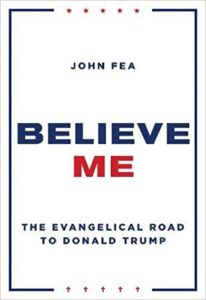 Believe Me: The Evangelical Road to Donald Trump

John Fea has two intended audiences for his new book, Believe Me: The Evangelical Road to Donald Trump. On the one hand, he dedicates this book “to the 19 percent”—to the segment of white evangelicals who (at least according to exit poll data) voted against Trump in the presidential race. But in another sense, Fea is also writing to the remaining 81 percent, to those who decided that Trump could best advance the cause of Christianity in America.

Fea writes as both a historian (he teaches at Messiah College) and a self-identified evangelical. In this second vein, he offers a sympathetic portrayal of the predicament in which evangelicals found themselves during the 2016 election season. He frames his discussion of the Obama administration as a period of intensifying fear for American evangelicals. Once the Obama administration sided with progressives on the same-sex marriage issue, he writes, it “became relentless in its advocacy of social policies that not only made traditional evangelicals cringe but also infused them with a sense of righteous anger.” According to Fea, the speed with which evangelicals found themselves “marginalized and even threatened” is “difficult to overestimate.” With important institutions seemingly “crumbling around them,” they were increasingly worried about the health of American society. At that point, many Republican candidates were more than willing to exploit these fears for political gain.

In other ways, too, evangelicals will see Fea as one of their own. In discussing abortion, he states his own position plainly: “The taking of a human life in the womb via the practice of abortion is a horrific practice.” Nor is he reticent when it comes to critiquing Hillary Clinton’s shortcomings: “Clinton, of course, was a deeply flawed candidate.” She lied about her email server, wrote off a portion of the electorate as a “basket of deplorables,” issued “tone-deaf” pronouncements on issues like abortion, neglected to address concerns about religious freedom, and made “virtually no effort to court evangelical voters” (a strategy that was “dumbfounding and incredibly stupid,” he adds, quoting Ron Sider).

Yet Fea also pushes back against convictions held by certain evangelicals. “It is ludicrous to assume that Barack Obama is a Muslim,” he insists. Fea also defends Obama and his former pastor Jeremiah Wright, explaining how “Wright was preaching a prophetic Christianity that was deeply rooted in the African-American experience, which made clear the distinctions between the kingdom of God and the kingdom of the United States.” Despite his pro-life convictions, Fea suggests that evangelicals may want to rethink their strategies for combating abortion. And, despite Clinton’s shortcomings, he makes a compelling case that she was “a devout mainline Methodist,” a far more experienced candidate, an advocate of humane immigration and family leave policies, and a defender of the rights of poor and marginalized Americans. In fact, he adds, “many Christians see plenty of biblical themes at work in her positions.”

It is as a historian, however, that Fea is most critical of his fellow evangelicals. Arranging his book thematically rather than chronologically, he explores three key themes behind the rise of Trump-friendly Christians: fear, power, and nostalgia.

In one chapter called “A Short History of Evangelical Fear,” he offers a less-than-flattering account of American evangelicalism. He writes of the Puritans’ fear of unorthodoxy and outsiders, which had disastrous consequences for dissenters and Native Americans alike, and he recalls a long history of evangelical anti-Catholicism. He also details the racial fears harbored by Southern evangelicals. For much of the 19th century, Fea writes, Southern evangelicals were certain they “had a lot to fear.” Besides worrying about the fate of the nation and the terrors of war, they also worried about protecting their “way of life, a culture and economy built on racial difference and the institution of black chattel slavery.” They feared slave insurrection, “the mixing of the races,” and an intrusive federal government enforcing racial equality in the South.

According to Fea, this history of fear ultimately culminated in “a playbook that too often gravitates toward nativism, xenophobia, racism, intolerance, and an unbiblical view of American exceptionalism.”

To expose the evangelical fascination with power, Fea turns his attention to recent events—to “the court evangelicals,” a term he coined to describe evangelical leaders like Robert Jeffress, Jerry Falwell Jr., James Dobson, Franklin Graham, Paula White, and Mark Burns, who have gained unprecedented political access through their fawning support of President Trump. (A prolific blogger, Fea first advanced this critique on his blog and then in the pages of The Washington Post). In this chapter, Fea outlines three “streams of American evangelicalism” that have produced the court evangelicals: the Christian Right, Independent Network Charismatics (INC), and the prosperity gospel. Here, Fea conveys less sympathy. He has little patience for court evangelicals who “have decided that what Donald Trump can give them is more valuable than the damage that their Christian witness will suffer because of their association with the president.” (To be fair, reading Fea’s description of the court evangelicals’ agenda, it’s not clear that any such conflict might occur to them.)

In his critique of court evangelicals, Fea reminds readers of the lessons Billy Graham learned when he mixed evangelism with party politics during the ill-fated Nixon administration. He quotes conservative pundit Cal Thomas’s critique of the Moral Majority’s quest for power: “Christian faith is about truth,” and “whenever you try to mix power and truth, power usually wins.” And he draws on the memoir of former George W. Bush aide David Kuo, Tempting Faith: An Inside Story of Political Seduction, to offer a cautionary tale about the ways evangelicals have been played by previous administrations.

At this point, it is worth pausing to reflect on the choices Fea makes in structuring his book thematically. Though Fea offers a sharp critique of evangelicals’ appetite for power, only rarely does he entertain the possibility that their pursuit of power may be intimately intertwined with their fears. For instance, though he acknowledges that white evangelical fear of newcomers might, in fact, reflect a fear of those who could challenge their own “power and privilege,” he quickly returns to a more sympathetic characterization of evangelical fear: “In a sin-cursed world, we should expect anxiety-induced emotions to rise in response to social change.” The problem, then, is not so much that evangelicals have misplaced fears, but rather that they “have not always managed their fears in a healthy way.”

To understand “the evangelical road to Donald Trump,” however, it pays to take a closer look at the nature of evangelical fear. Why have evangelicals feared some things (immigrants, civil rights, feminism), and not others (militarism, authoritarianism, guns)? Is fear simply a natural response to changing times, or is it actively stoked by individuals and groups with vested interests? Perhaps, upon closer inspection, fear and power end up being two sides of the same coin. Perhaps what white evangelicals have most feared is simply a loss of power.

In his final chapter, “Make America Great Again,” Fea offers a trenchant critique of evangelical nostalgia. For Fea, the cure to nostalgia can be found in an accurate understanding of history. To this end, he rejects the notion of Christian America advanced by people like pseudo-historian David Barton, hosts on Fox News and conservative talk radio, and countless evangelicals themselves. (As author of the book Was America Founded as a Christian Nation?, Fea is in his element here.)

Fea demonstrates how an accurate historical understanding reveals that “racism, xenophobia, imperialism, violence, materialism,” and other ethical shortcomings have indelibly shaped America’s past. When white evangelicals ignore these darker chapters, they leave themselves susceptible to a Christian nationalism that amounts to nothing less than idolatry. Fea takes pains to explain how the phrase “Make American Great Again” might conjure images of slavery, burning crosses, segregated schools, and “colored-only” water fountains for African Americans.

If much of this history is cause for discouragement, Fea turns to theology for hope and inspiration. Quoting Marilynne Robinson, he observes that “fear is not a Christian habit of mind,” reminding evangelical readers that it is God who provides ultimate refuge, not Donald Trump or any other political leader. “What would it take to replace fear with Christian hope?” he wonders. “What would it take to replace the pursuit of power with humility?”

It’s almost certainly asking too much of Fea’s book to clear away all incomprehension between those wondering how their Christian sisters and brothers could vote for Trump and those who can’t understand why fellow evangelicals don’t see Trump as “God’s guy.” But whether you belong to the 19 percent or the 81 percent, you’ll find reading Believe Mea provocative and illuminating exercise.