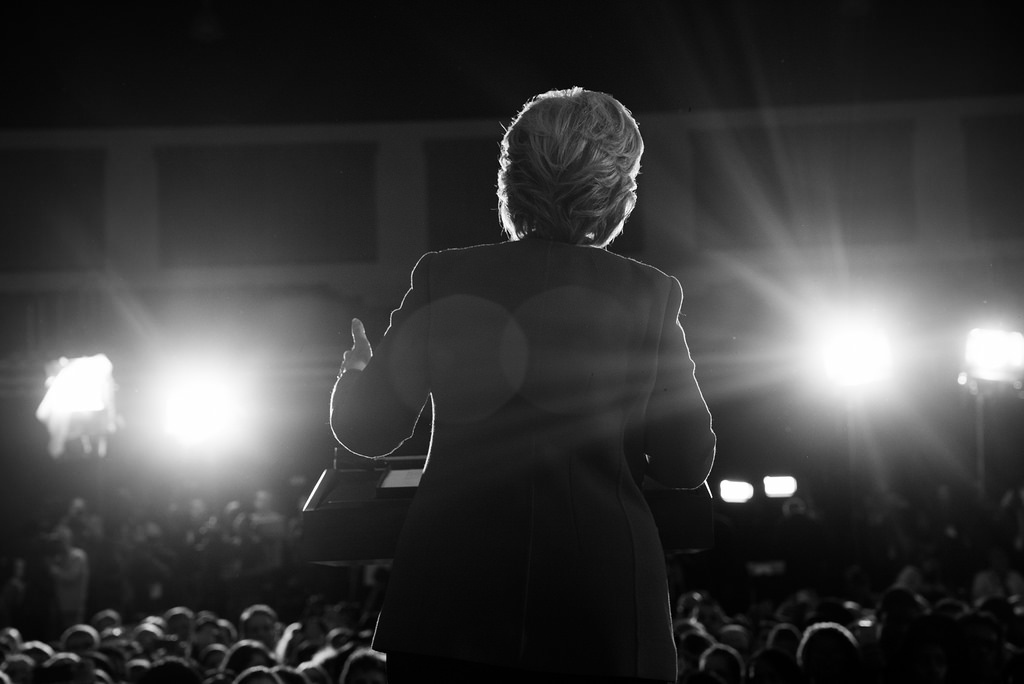 Let’s start with a disclaimer. I’m a historian, and as such I have no particular skills when it comes to prognostication.*

Case in point: At the start of this election season, I would have placed my money on Scott Walker as the likely Republican nominee.

But if history teaches us anything, it’s that anything can happen. This was first brought home to me back in 1991. I was a high school student, leggings and tunics were in style (the first time around), and the (first) Gulf War had just wrapped up surprisingly well, or so it seemed. George H. W. Bush was enjoying approval numbers approaching 90 percent, and I remember pitying the poor Democrat who would face him in the next election. Mere months later, Bush Sr. was defeated by a guy named Bill Clinton. It turns out it was the economy, and yes, I did feel rather stupid. I resolved then and there to remain a skeptic when it came to polls, politics, and prognostications.

And so I’ll offer the following not as prophecy, but rather as a provocative thought-piece.

I’m currently writing a book on Hillary Clinton’s religious faith. It’s been an interesting project thus far, to say the least. I’ve had fascinating conversations with her Sunday school classmates, I’ve dug through musty file cabinets under church stairs to discover the sermons and songs that shaped her early beliefs, and I’ve read hundreds of pages of religious writing that Clinton herself credits with reorienting both her faith and her politics during critical periods in her life.

At the heart of the project, however, has been an underlying conundrum. Why is it that Clinton, who has remained remarkably consistent both in her commitment to a progressive Methodist faith, and in expressing the centrality of that faith to her life and to her political career, has had such a hard time communicating that fact to American voters? Indeed, the first time Clinton ran for president, polls conducted by the Pew Research Centerrevealed that she was perceived as the least religious of all leading contenders according. (31 percent perceived her as “Not too/not at all religious,” while only 16 percent felt the same about Obama; Giuliani, the lowest scoring Republican candidate, came in at 23 percent.)

To answer that question, I turned to history—to the rise of the Religious Right, but also to the startling decline of the Christian left. The 1970s are critical here, the era where Christianity became inextricably linked with Republican politics. After a brief but ultimately disappointing flirtation with the Sunday-school teaching, born-again Southern Baptist Jimmy Carter, evangelical Christians threw their support behind Ronald Reagan, an admittedly less-than-inspiring Christian, but a charismatic leader of a different sort who promised “morning in America” as an antidote to the apparent economic, social, and moral malaise of the 70s.

And yet it was never quite clear if the marriage of evangelicals and Republicans was one of love or convenience. And it was never quite as stable (or as happy) as each party liked to suggest. Through the Reagan years and both Bush presidencies, the relationship was rife with miscommunication, bouts of the silent treatment, threats of divorce, signs of reconciliation, and a recurring sense of betrayal.

But with the Democratic Party becoming the party of abortion rights, feminism, and more recently, gay marriage, there were no open arms into which evangelicals could run.

And then came the Obama presidency. Obama, more than any other Democratic candidate in recent memory, refused to concede the Christian vote. Speaking a language of faith that appealed to a younger generation of “social justice Christians,” he openly courted progressive evangelicals. He was making inroads against John McCain on this front until the selection of Sarah Palin helped shore up the evangelical vote. The Jeremiah Wright controversy and persistent rumors that Obama was not even a Christian further impeded his ability to break the Republican hold on Christian “values voters.” (The role that race plays in all of this is worth considering as well.) As it turns out, opposition to Obama seemed to reinvigorate the Religious Right, whose role as political power brokers had seemed much diminished in recent years.

Then along came Donald Trump. More than any other candidate, Trump has elevated the question of personal character when it comes to selecting a political candidate. This question has surfaced before, at least since the days of Nixon: to what extent should a candidate supported by evangelicals embody Christian values? More often than not, evangelicals have decided that backing a winning candidate was strategically more important than backing the candidate most compatible with their belief system. (Just ask Pat Robertson…or Ben Carson, or Marco Rubio).

Now there can certainly be good reasons to consider factors other than personal faith when choosing a presidential candidate. But to many evangelicals, Trump makes a mockery of all that is Christian. The fact that he continues to draw ever larger numbers of “evangelical” voters has befuddled a number of evangelical leaders, who are reaching out to their followers with increasing urgency to stem the tide of Trump’s momentum before it’s too late. (Trump’s popularity among “evangelicals” has also prodded pollsters to reassess how they define “evangelical,” a welcome and long overdue development.)

Needless to say, Clinton has never fared all that well among evangelical Christians, perhaps particularly when it comes to questions of character. But the current contrast with Trump is stark.

Allow me to share a few lines from a speech she gave last weekend after winning the South Carolina primary in a landslide, themes she echoed in her Super Tuesday victory speech:

How are we ever going to strengthen the bonds of family and community again?’

Well, we’re going to start by working together with more love and kindness in our hearts and more respect for each other, even when we disagree.
Despite what you hear, we don’t need to make America great again: America has never stopped being great. But we do need to make America whole again. Instead of building walls, we need to be tearing down barriers. We need to show by everything we do that we really are in this together.

You know, on one of my first trips to South Carolina during this campaign, I stopped by a bakery here in Columbia. I was saying hello everybody; I went over to say hello to a man reading a book in the corner. Turned out he was a minister. And the book was a Bible. He was studying I Corinthians 13, which happens to be one of my favorite passages. “Love never fails,” it tells us. “Love bears all things, believes all things, hopes all things, endures all things.”

These are words to live by not only for ourselves but also for our country. I know it sometimes seems a little odd for someone running for president, these days, in this time, to say we need more loving kindness in America. But I’m telling you, from the bottom up my heart, we do. We do.

You see what she’s doing here?

She’s not just taking a page out of Reagan’s “Morning in America” playbook. (Which of course situates the Republican “malaise-sayers” as heirs to Carter’s perceived legacy of failure. Which of course is where any similarities between Carter and the current the Republican contenders end). But she’s also making a play for those who have long fought to “restore Christian America.”

For Clinton, bringing faith into politics isn’t anything new. She has long argued that it was her Christian ethics that led her to work tirelessly on behalf of poor women and children, to fight for health care reform, in short, to devote her entire career to politics. However, few people, on the left or the right, had ears to hear.

Perhaps one of Trump’s most significant legacies (assuming he isn’t elected president) will be the disruption of uneasy but enduring linkages between evangelical Christianity and the Republican Party.

Rather than lament this development as the end of an era, evangelicals might see this as a strategic opportunity. After all, what do they really have to show for this decades-long alliance? By putting the evangelical vote back in play, they may find both parties more willing to engage their interests.

Could Trump finally break the Republican hold on “values voters”?
Could Hillary Clinton win on a campaign to “make America Christian again”?