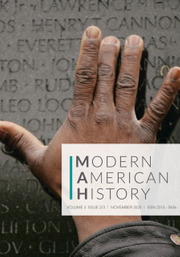 Review: Cambridge Core,” A Double Whammy for the History of Evangelical Protestantism,” by David A. Hollinger

Most histories fail to convincingly explain why 81 percent of American white evangelical voters supported Trump in the 2016 election. Many scholars, like political pundits, hold an idealized vision of the evangelical past, which leads them to assume that “real” evangelicals are actually not so enthusiastic about the deeply anti-intellectual, frankly authoritarian, materialistic, and sexually promiscuous media personality who won the White House. The history of evangelical thought and action after all includes many examples of sensible, humane, and intellectually creative work. How could such a wholesome religious tradition as evangelical Protestantism possibly share responsibility for the political success of Donald Trump?

Two recent books offer especially illuminating hints of a more critical perspective on evangelicalism’s past and present: Darren Dochuk’s Anointed with Oil: How Christianity and Crude Made Modern America and Kristin Kobes Du Mez’s Jesus and John Wayne: How White Evangelicals Corrupted a Faith and Fractured a Nation. Taken together, they constitute a veritable double whammy in the reorientation of the study of evangelical Protestantism as a force in the history of modern America.

Du Mez’s most persistent theme is the systematic, overt, strictly enforced opposition to the expansion of women’s role beyond traditional matrimony, sex on demand, and motherhood.

Both Jesus and John Wayne and Anointed with Oil illustrate how the selective use of scripture by people who believe in its absolute, literal, and timeless truth can embolden them to isolate themselves from sources of information and insight more accessible to people who understand the historicity of the Bible and of themselves.