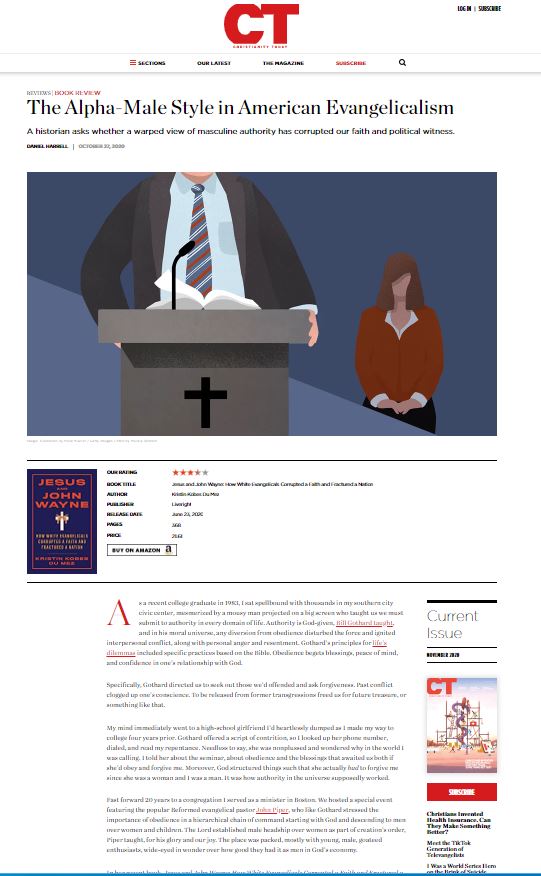 In her recent book, Jesus and John Wayne: How White Evangelicals Corrupted a Faith and Fractured a Nation, Calvin University historian Kristin Kobes Du Mez situates Gothard and Piper in a long line of white, alpha-male leaders whose devotion to a militant Christian patriarchy and nationalism inevitably led to exuberant support, among large numbers of white evangelicals, for Donald Trump as president—despite his clear deviation from anything evangelical in a spiritual or behavioral sense. As it turned out, Du Mez argues, obedience wasn’t as much about goodness and grace as it was about power and who wielded it.

Du Mez saddles up with Teddy Roosevelt as a Rough Rider and giddyups all the way to the present, lassoing the likes of Billy Sunday and Billy Graham, Jerry Falwell and James Dobson, Duck Dynasty and Mark Driscoll, along with plenty of other Christian cowboys (and a few cowgirls too). She shows how militant white Christian patriarchy paved the way for a fractured nation and a ruined religion whose doctrine of grace and commandment to love diminish in the face of political expedience. She stresses how, as a political culture as much as anything, white evangelicalism captivated believers enough to redraw the boundaries of faith around political allegiance rather than creedal assent. (One example of this dynamic at work: As I entered my new role as editor in chief of Christianity Today, I was asked more about my position on particular policy issues than about any thoughts on theology.)

On one level, Du Mez’s thesis is compelling and extensively researched. She shows how white evangelicalism worked as both a basis and cover for white-privileged power plays and culture wars, all in an attempt to preserve a hierarchy that served white male agendas, excused misbehavior, and exonerated abuse. Not that all of us white males imbibed the testosterone. Plenty of us, including what Du Mez calls the “northern establishment evangelicals—the Wheaton and Christianity Today types,” were baffled by the overwrought Call of Duty discipleship. Still, our devotion to specific social policies, our worries over the loss of moral high ground and cultural hegemony, our fears over the dissolution of Christian institutional influence, and our own leadership led us to render unto Caesar the things that belonged to God in a desperate last gasp for legitimacy.