“The Public and Private Faith of Hillary Clinton”

By Kristin Kobes Du MezOctober 31, 2016February 6th, 2019No Comments
Interview by Daniel Burke, CNN Religion Editor, for the second of two stories on the religious beliefs of the presidential nominees, “The Public and Private Faith of Hillary Clinton.” CNN, October 31, 2016. 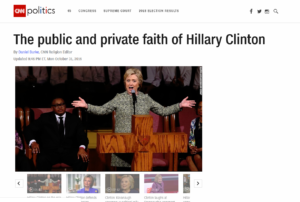 As first lady, Clinton says, she became close to several members of The Fellowship, a secretive Christian network of Washington power brokers. While in Congress, she shocked some Republicans by joining the Senate Prayer Breakfast.

And yet, many conservative Christians refuse to recognize Clinton as a fellow believer. Ben Carson has connected Clinton to Lucifer, and a new documentary asks whether she is “an illuminati or the anti-Christ.“On matters of Christian doctrine, Clinton shares core beliefs with conservatives. She has said she believes in the Holy Trinity, that Jesus’ death atoned for human sins and that Christ’s resurrection was a historical event. She prays regularly and is well-versed in Scripture, citing biblical passages accurately and with ease.

Kristin Kobes Du Mez, a historian at Calvin College in Michigan, said she was drawn to study Clinton’s faith in part to understand why conservative Christians so vehemently deny it.

“Among conservative Christians — those who most care about bringing their faith to bear on politics — there’s such a long history of if not demonizing Hillary Clinton, then at the very least setting her against everything they hold dear.”

From the moment Clinton stepped on the political stage, she seemed to represent a rejection of conservative Christian values. She dismissed women who “stay home and bake cookies,” insulting Christians who hold to “biblical” views of submissive women. She was shaped by a church that sees government as a partner — sometimes to be criticized, but rarely feared as a threat to religious freedom. She participated in the anti-war movement and has affirmed liberal orthodoxies on abortion and other social issues.

Last year, she said that “deep-seated” religious beliefs on abortion “have to be changed,” a pledge that angered Christians who consider abortion the killing of innocent lives.

“They aren’t often confronted with different ways to be Christian in America today. Thus, they assume Clinton must be lying about her faith. Or pandering,” the historian said.

Of course, Clinton is no mere figurehead. She has been a protagonist in some of the most protracted political scandals in recent history, from her husband’s sexual infidelities to her own dissembling about the use of a private email server while secretary of state. According to surveys, many Americans do not think Clinton is trustworthy.

Still, as Clinton has acknowledged, politics is a “rough and tumble” business, and it’s hard to imagine any politician who hasn’t found foes along the way. But at a Baptist convention in Kansas City, Missouri, Clinton said that she has been trying to follow Christ’s commandment to love her enemies.

It is just as hard, it seems, for Clinton’s enemies to love her.It’s a lesson she remembers well from teaching Sunday school in Arkansas, she said, but some days it’s “really hard” to put the lesson into practice.

“The Public and Private Faith of Hillary Clinton”